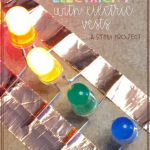 I love teaching about electricity. It is one of my favorite science units, and I am always trying to think of new ways to engage students with it. If you remember, in the past I used pickles and an electrical cord to have a little fun with my glowing pickles activity.

Most recently, I had a guest blogger talk about STEM basics in the classroom, and it made me realize I had always really been doing STEM all along in my classroom – I just wasn’t calling it that. In fact, it wasn’t that long ago I blogged about an erosion activity that could technically be a STEM activity. Isn’t it funny how we do that as teachers?

Anyway, I decided to take a crack at it “officially” and mix a little fun into my electricity unit. I was going to have my students demonstrate their understanding of current electricity while implementing a STEM challenge – and it was going to be fun!

First, I reviewed current electricity and the two types of circuits that we were going to focus on: series and parallel circuits. I also reviewed how like charges repel, while opposite charges attract. This was to make sure that everyone had a good starting point and that I had refreshed their memories, or background knowledge really.

The local road crew is stuck working at night on the roads, but it is difficult to see them. We are recruiting your class because you have some really smart kids that know a lot about electricity! Your job is to create some really cool vests that will light up at night so the drivers can see the road crew workers. Of course, the vests can’t have a bunch of cords hanging off them, and there are no outlets to plug things in.

Here was where I also explained the rules and requirements of the activity by handing them a “You’re Hired” sheet. Written on that sheet was the requirement that they had to create at least one series circuit and one parallel circuit.

I asked students a series of questions to get them started. They first worked independently, because I wanted them to think on their own and think of their own plan.  I showed them the materials they would be working with – LED lights, copper tape, and small button batteries – to create the electricity on their vests.

After several minutes of sketching and coming up with a few different ideas, I then had students get together with a partner just to share their ideas and get some feedback. The activity was completely independent, but like anything in life, it’s nice to bounce our ideas off of others.

Creating the Light Up Electric Vests

Students then began creating their vests. We used large paper bags to make our vests. Some students struggled, while others did well the first time.

Through some experimentation, failures, restarts, and modifications, we were eventually successful at creating our vests.

Just like the actual engineering design process, we had to sometimes stop and ask ourselves,

“Okay, what is going on here?”

“Why is this not working?”

“What can we do differently?”

I’m not going to lie:  We had challenges. Students had to face some problems – but that’s the point of STEM challenges. They need to learn patience and how to think critically.

We discovered that lifting the copper tape too many times caused it to not be as effective as it was in the beginning. This allowed the perfect teachable moment for me: Why do you think this is? What is causing the current to not flow as well now with the copper tape?

One student discovered that when he placed copper tape down, then the LED lights, then another layer of copper tape down that it worked even better. We discussed this and why it was.

We also had times when sometimes a row of LED lights would only light a few lights but not the entire row. We discussed why we thought this was and brainstormed ways we thought we could fix it.

The thing is, even if a STEM activity fails or has moments like those above for some kids, you can still use it as a very beneficial moment to teach and discuss the concepts being taught, all while tying it into the real world of engineering and problem-solving. That’s what I LOVE about STEM – it opens so many conversations, and you really could use it to teach so much!!

Overall, the activity was extremely beneficial and eye-opening, for both me and my students. I was able to see not only who knew what series and parallel circuits were but also who were the students that were determined, problem solvers, and leaders.

This activity above is in my store if you want to save some time and purchase it. Either way, it’s definitely an activity that your students are sure to remember.