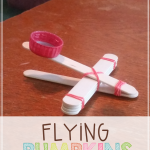 We have been studying Force and Motion in the classroom and with Halloween coming up, I really wanted to tie it to something we were learning. Yes, I’m one of those teachers who has to make the fun stuff still educational. ?  So I thought, why not tie it to our science and have flying pumpkin races too? (That’s my trick of the trade!)

After we created our two main portions of the catapult, we took the four banded sticks and wedged them between the two sticks of picture 2. To hold it in place, we then placed a rubber band in a criss-cross position around the four sticks (see the main picture).

We used a bottle cap for our “basket” and I hot glued these in place. That’s when the fun began! We inserted a candy pumpkin in our “baskets” and got ready to shoot them through the air.

After applying a little force, the pumpkin was in motion! We raced one another and timed the speed and distance of our flying pumpkins. It was a great lesson about force and motion, inexpensive to create, and a fun way to integrate Halloween.

Of course, you don’t have to have pumpkins to shoot through the air. You could use other objects just as well. Additionally, you could also use this opportunity to discuss simple machines!

Now for the best part of this blog post- the treat!

I have here below the worksheet we used during this activity! We discussed what catapults were and what they are used for. Then we talked about the relationship between force, speed, and distance. We then applied a small amount of force to our catapults for our first trial – we lightly pushed them down and watched the pumpkin barely fly. We recorded the amount of time and then measured the distance it traveled to determine the speed. Then we completed another trial, but with more force to our catapult. Afterward, we discussed the relationship between force and speed. We know the more force you apply, the farther it’s going to travel and the more speed it will have.

Want to try this activity out in your classroom? Download it for FREE by clicking here.

Every year my students enjoy the hands-on activities and exploration of force and motion. You can read about some of our other activities here in a previous post.

Check out these related products!Save