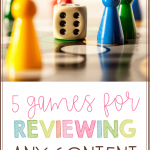 When I was in school, I remember teachers reviewing content by simply having us open a book, going to the end of the chapter, and answering the questions. It was not my idea of reviewing, nor was it exactly exciting. In fact, I hated the end of a chapter. It was very predictable and it never helped me remember anything. There was no application piece. There was no engagement. And there definitely wasn’t any benefit to it.

As I mentioned in my last post, Why You Should Use Games in the Classroom, often times teachers feel concerned about using games too much in the classroom for fear that it isn’t educational enough. That couldn’t be farther from the truth. There are incredible benefits from using games for reviewing and learning (including a surprising one I mentioned in that post). Check them out if you’re apprehensive about using games in your classroom.

1.) Heads Up, 7-Up. This has long been a classic game for indoor recess, but now you can use it for any topic! Play the game like you normally would, but before a student can guess who picked them, they have to solve a problem or question on the board. Only if they get both the question and guess who selected them, can they switch spots. (As an alternative, have all students write their answer on an index card first before putting their heads down).

2.) Zinkers! Break your class up into teams. Then draw a question or task cards and read it to the first team. If they get it correct, have them draw a slip for points. (The point options are 25, 50, 75, or 100.) If they get a slip that says Zinkers, their team loses all their points. If they answer incorrectly, the other team takes a turn. Students play until all the questions are answered or time is up. The team with the most points win.

3.) Sink or Swim. I love this game for reviewing. Break your class up into two teams and place them on opposite sides of the room. The middle of the classroom is an ‘ocean.’ Have team 1 answer a question. If they answer it correctly, they can select a member from team 2 to ‘sink’ (move into the center of the ‘ocean’ and sit – they are out). If they are incorrect, they must ‘sink.’ Then team 2 takes a turn. If correct, they can choose to ‘sink’ a member of team 1 or save their sinking team member. This continues until all the questions are answered. The team with the most members swimming (not sinking) wins!

4.) Knock ‘Em Out. Have students stand in a row along a wall. Randomly draw a student’s name (I use sticks) and randomly draw a question. Ask that student whose name you drew the question. If he gets it right, then he can choose to have the person to the right or left of him sit down. If he answers wrong, then he has to sit down. Continue until only one student is left standing. Occasionally on missed questions, you can ask a student who is knocked out (or sitting) if they know the answer so they can rejoin.

5.) Schooled. Break the class up into two teams. Draw on the board for each team 8 lines like you would when playing the game Hangman. (_ _ _ _ _ _ _ _) Then ask questions back and forth between the teams. If a team gets the question correct, a letter is added to the opposing team. If they answer incorrectly, the other team gets a chance to answer. Continue playing until the word ‘SCHOOLED’ is spelled out. The first team to have schooled spelled out is the losing team.

Of course, there are other games too, such as Pictionary, trashketball, Flyswatter SWAT, and Around the Room. You could even pretend to be on a game show by bringing up a player from each team and having them face one another and placing one of their hands behind their back. Then when it’s time to ring the “buzzer” have them press your stapler or a battery operated touch light (found typically in dollar stores).

You’ll also find that I have a few games described in other posts here on my website, such as the Heartbreaker game, Human Bingo, and Task Card Games.

4.1K shares
PrevPreviousWhy You SHOULD Use Games In Your Classroom
NextSpark a Love of Learning with GamesNext