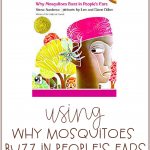 I love introducing my children to traditional literature. I love fairy tales, myths, legends, tall tales, and fables. There is just something special to me about all these stories that are generally passed down over the years. I love exploring how some regions had a similar story or how some cultures believed things came into existence! This week my mentor text is an African tale — or legend — called Why Mosquitoes Buzz in People’s Ears by Verna Aarema.

In this story, the mosquito begins by telling a whopper of a story to the iguana. The iguana decided he had heard enough and was not going to listen anymore- so he places sticks in his ears. This begins a chain of events that nearly upset the entire forest and causing the owl to not wake the sun so that the day can come. At one point the mentor text says:

“So, it was the mosquito

who annoyed the iguana,

who frightened the python,

who scared the rabbit,

who startled the crow,

who alarmed the monkey,

who killed the owlet—

so that the day can come.”

When the mosquito realizes that all the animals are upset with him, he is overridden with guilt and hides. Now the mosquito buzzes in people’s ears to ask if everyone is still angry with him. To that, people respond with a “whack” to the pest.

What I love about this folktale is that it makes an excellent text for not only discussing traditional literature but also for cause and effect. It explores how one cause led to multiple effects. In my classroom, I create a T-chart and have students list the cause on the left with the effect on the right. I’ll begin by reading it and modeling cause and effects that I notice, then I’ll pause halfway through the book and have students try to come up with their own as I finish reading. Then we share out. We discuss how the book would have been different if one cause was changed. We also discuss the importance of communication and observation (such as the sticks iguana shoved in his ears). Further, this mentor text has a ton of onomatopoeia and just looking at that list above that I quoted, you could discuss as a group the various words the author described scared.

(Aff. Link) You can purchase Why Mosquitoes Buzz in People’s Ears by Verna Aarema for your classroom by clicking here.