3 Ways to Stop Bullying in your Classroom 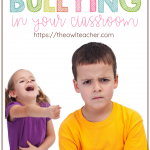 October is bully prevention month and so I thought I’d share some classroom management tips and ideas to help prevent bullying in your classroom.

Let’s face it. Bullying has always existed. I grew up with it. I remember being told I had “cooties” and being made fun of for everything under the sun. And I think bullying is much worse than it has been in the past, especially with all the technology that we have today that people can easily hide behind. Nevertheless, it doesn’t change the fact that teasing and harassment can be hurtful – even if it appears to be alright by the ‘victim’.

To start let’s define bullying. So often I’ll hear from a parent that their child had been bullied when really the child was called a name once. I think there are some misconceptions. Being called a name once by someone or them not wanting to share their toy does NOT make them a bully. Instead of immediately labeling the situation as bullying – and ultimately a much worse scenario, we need to teach the children problem-solving strategies. (Doesn’t it seem there is less time dedicated to teaching social skills?)

www.stopbullying.gov states this for the definition of bullying:

Bullying is unwanted, aggressive behavior among school aged children that involves a real or perceived power imbalance. The behavior is repeated, or has the potential to be repeated, over time.

Note that it is repeated. Many parents misunderstand this fact.

To prevent bullying, bullying expert and researcher Dr. Dan Olweus tells us that we need to change the culture in the school rather than trying to change the behavior of individuals. You can start right in your classroom! Here was his advice on doing just that:

1.)  Set clear standards for acceptable and unacceptable behavior.  It’s important that we model throughout the entire school year behavior that is both acceptable and unacceptable. This can be done through role modeling, reinforcing the acceptable behavior, being consistent. We need to cover all behaviors, and NEVER assume that any student knows any rule. I made that mistake my first year teaching. I assumed because they had been in the school the previous four years they knew the rules. I only talked about my specific rules. That was definitely not the case. They are going to see if they can possibly get away with something from you – so never assume.

2.)  Implement consistent consequences for actions that are likely to hurt others.  You can’t overlook anything. Unfortunately, I struggled with this a lot at the beginning of the year. What should I ignore and when should I say something? Were they kidding or not? I even struggled with enforcing any consequence when the really good, nearly perfect student messed up. Have you ever experienced that, where you just struggle with giving a nearly-never-in-trouble-student a consequence like an always-in-trouble-student? No matter how hard it is, you can’t go easy on a student that is nearly never in trouble and go harder on one that is. You can’t overlook “light” teasing either. It’s hard, but you have to be consistent and enforce the same consequences for the same choices- regardless. Even if Johnny says, “oh, it’s alright. We just tease each other this way. I know he’s playing. It doesn’t bother me.” You still will need to stop it and enforce consequences. The reason being that if it isn’t stopped, eventually that kid teasing Johnny will think it’s okay to tease everyone that way – and he’s likely to find someone that doesn’t think it’s okay. Plus, are you 100% certain Johnny is okay with it? Don’t kids want to look tough in front of others?

3.)  Provide education about bullying to every student.  Inform students regularly – not just a few lessons in one week and your done. Regularly. Teach them what bullying is. Teach strategies to stop bullying. Discuss the effective portion of bullying.

Here are a few resources for bullying prevention: