Why You Should Be Using Discrepant Events 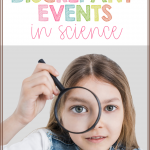 One of the best ways to engage students in science at the start of a new unit is to use a discrepant event. Discrepant events pique students’ interest and leave them craving the knowledge that you plan to teach them. Students are often left begging you to tell them “how did that happen?” That’s the kind of engagement we need (and want!) in science. It’s a win-win!

What is a Discrepant Event?

A discrepant event is a surprising and paradoxical outcome that is not what an observer would normally expect. A most common example of a discrepant event would be oobleck. Most children (who have never seen it before) would not expect it to have both properties of a solid and properties of a liquid. Nor would they expect it to roll into a ball and form, but immediately spread out as soon as the “ball” is placed on the table.

Why Should You Use Discrepant Events?

The largest reason is that students will become hooked on science. To them, this will appear to be “magic” and their ears will be wide open to understand just how that worked. Then they will be ready to “amaze” their friends both with the “trick” and then with their “smarts.”

But there’s also the fact that it’s a well-researched and well-documented teaching strategy! It helps teachers assess students’ knowledge and target any misconceptions.

Further, it helps students develop more of a scientific mindset. When a scientist makes an observation, something may spark their curiosity which will then lead to an investigation or research. This is exactly what inquiry science is – and exactly what NGSS wants us to do.

It develops critical thinking and problem-solving skills – something all students need to develop more of.

In the first video below, the mini marshmallow is placed in a syringe and the end is capped. Then, as the plunger is pulled back the marshmallow increases in size. When the plunger is pushed in toward the marshmallow, it decreases in size. This would be a great example to do on a doc cam or for students to do themselves. It’s best to use a syringe that is a bit longer (and not necessarily as wide as the one I used in the video).

This is one of my favorite examples. In the video below, you have two candles that are burning. After about a minute of both candles burning, you blow one out. Then you hold the one candle that is still lit over the unlit candle’s smoke. The unlit candle will then light. It’s exciting to watch the flame “jump” from the lit candle to the unlit candle without actually touching the flame to the wick! Of course, you don’t have to use two candles. You can also use a candle with a match. Just relight the candle using a match and the smoke. This discrepant event is sure to excite your students and make them say, “how did that happen?!“

In this example, I asked my husband to kindly volunteer for me so I could record the demonstration. First, my husband takes a long paint stick and places it under two pieces of flat newspaper. (Make sure when you do it, you smooth out the air pockets between the newspaper and the table. You’ll notice this in the video.) My 5-year-old twins were around, so I went ahead and asked them what they thought would happen. They reacted just as most kids do: they thought the stick would pop up through the newspaper (tearing the newspaper) and then land on the floor. I mean, who would really believe a newspaper would break a paint stick? When you watch the video, I slow it down when my husband breaks the stick so you can see there’s no crazy business with the stick and newspaper. Then you can see the newspaper does not tear. Try it yourself. 🙂

These are just a few examples of discrepant events. There are lots of them out there. Just do a quick google search to get more ideas, or follow me to discover more!

How to Use Discrepant Events in the Classroom

Before demonstrating any discrepant event, first, ask students what they think could happen. Emphasize that there is no right or wrong answer. Then after the demonstration, have students write down any questions they have along with what they think is occurring. Ask the students guiding questions to help facilitate the discussion. Depending on your goal, you can have students work through the scientific method and processes, or you can have students research. Ultimately, make sure that students are never left hanging and that you do explain what did occur and how it happened.

After your first time using a discrepant event in the classroom to introduce a science concept, not only will your students be engaged, motivated, and hooked on science, but so will you!

PrevPreviousBeginning of the Year Science Activities
NextGrowing Your Own Crystal GardenNext