Home » Not Your Traditional Cause and Effect Chains

Not Your Traditional Cause and Effect Chains 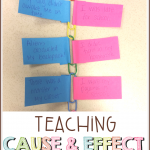 The Cause:  The students not understanding cause and effect.

The Effect:  The teacher banging her head against the wall.

Don’t we all have days like that? Cause and effect is a really, really, really, (did I mention REALLY?) hard concept for children. It seems they are always mixing up the “what happened” and “why did it happen”. Some will look for which is listed first in the text and assume it’s the cause.

How can we teach it better so all the little ones really get it? 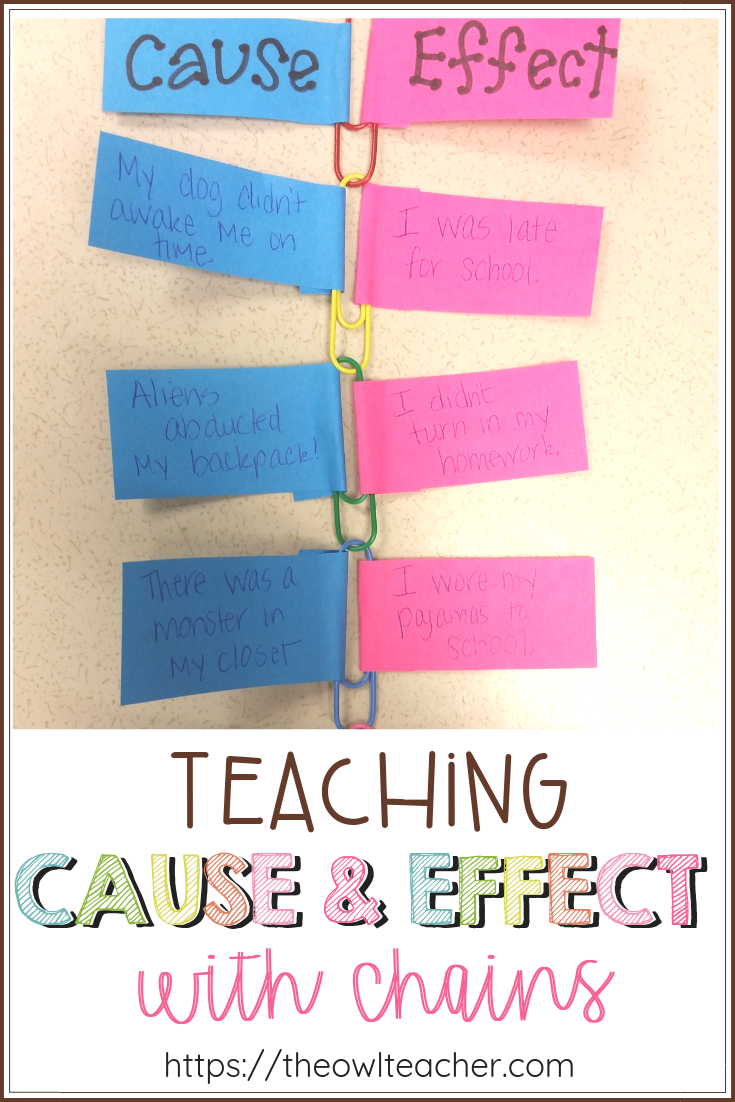 I don’t know. I do know, I have taught it multiple ways over the years with some success. I just think it is a concept we need to frequently spiral back to as the year progresses.

When I introduce cause and effect, I try to start by role-playing cause and effect. I provide various students with role-play cards- some list the cause, while others list the effect. You can download them free by clicking on the picture below or by clicking here. The student reads to the class what is on the card (the cause or the effect) and then has to role play the opposite. For example, if the card says, “You have the cause…You were jumping on the bed. Role-play the effect” students would have to guess what the effect of the cause is. (You could also have students role-play the entire thing and students guess both the cause and the effect.) I love how dramatic my kiddos get. Not only is this an engaging way to hook them on cause and effect, but this is also a springboard for conversation about how sometimes there are multiple effects to a cause and so on. 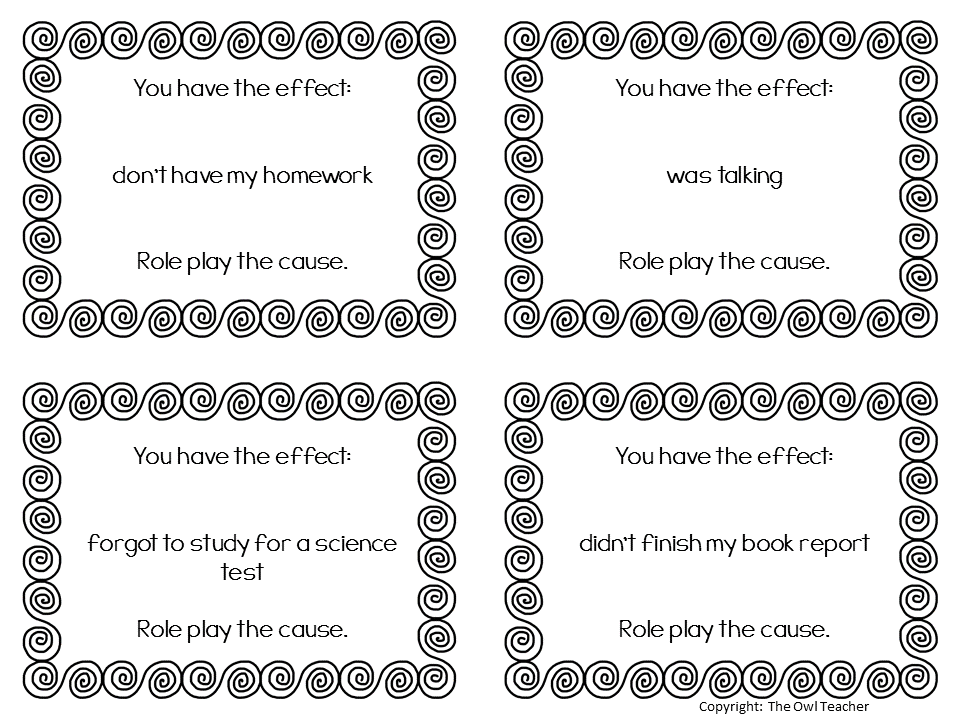 After our role-playing, we created our own cause and effect sentences that related to school. I let them get a bit creative. I had one student’s homework being abducted by aliens (well, it is cause and effect). After creating our sentences, we created chains. No, not those loopy *yawn* chains. These: 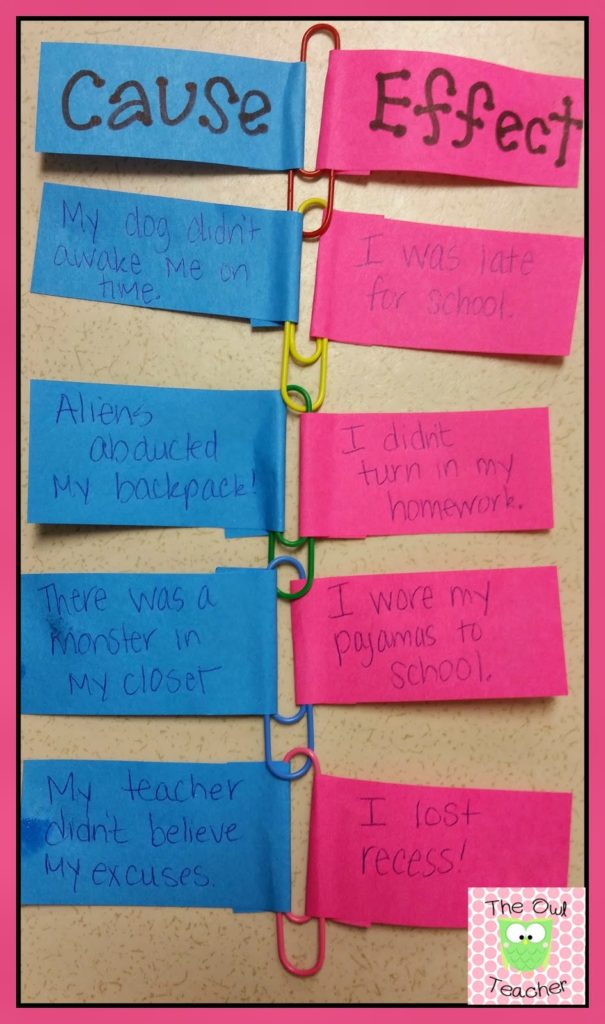 We used paper clips and post-it notes. I had students trim their post-it notes down a bit to fit the paper clips. All of our causes were in one color, while all our effects were on another. Afterward, we discussed how we could flip them around so the effect was first. I think by reading it that way, it helped some of them understand a bit more. 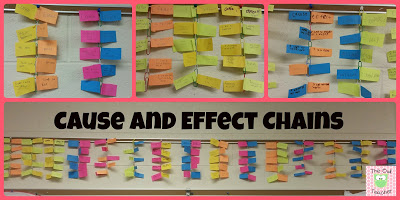 Alright, so children do seem to grasp cause and effect when it relates to their life (well, there are a few that sometimes still don’t relate that no recess happens when you have a ton of missing work… but they’ll get there!). Children also seem to grasp cause and effect pretty well with natural disasters. So, I pulled in the Time for Kids magazines and articles that can illustrate these a bit more. I brought in nonfiction books related to tornadoes, hurricanes, earthquakes, volcanoes.

So what do you do after you step out of the familiar zone?

One way that I tried to help students grasp the concept is by using the “If… Then…” method. I explain to students that the “If” is the cause and the “then” is the effect. I ask them to try to plug into this phrase the events of the story (or the parts they think are the cause and effect) and see if it makes sense.

“If Johnny oversleeps, then he will be late.” Therefore, Johnny oversleeping is the cause and he will be late is the effect. If it was listed in the text as he was late because he overslept, I’ll ask kids to still put it in the “If… then…” method to see if it makes sense (to point out that the cause is not always listed first.)  For instance, “if Johnny is late, then he will oversleep” does not make sense.

If you’re looking for a way to tie science to cause and effect, check out my Earth Changes Cause and Effect Cards.

I’m still working on the ever-difficult cause and effect…