A Reading and Analyzing Nonfiction Strategy 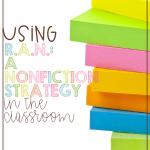 I hate the KWL. I’m sorry if you are a huge fan of it, but any variation of it, I just hate. I don’t know why I loathe it so much, but I do. I think it was because when I first began college, it was the popular graphic organizer that everyone was doing in their classroom. So, when I was introduced to the R.A.N. Chart some years later – a chart that was at first introduced as an adaptation of the KWL – you can imagine my thoughts. However, I tried to be open-minded. Maybe this would be a better version of the already millions of them out there. And, surprisingly, it was.

Recently, I posted about how I got my students actively involved during our Animal Classification Science Unit by making questions. Last week, we were discussing the five classes of vertebrates, and I thought this would be the perfect time to use Tony Stead’s R.A.N. (Reading and Analyzing Nonfiction) Chart. Since I had five classes of vertebrates to cover, I began by breaking my students up into groups based on the jigsaw method. Each member in the group would learn about one of the five classes and report back to their group.

First, I had students begin by writing what they think they know about their assigned class – not what they know, but what they THINK they know. (I like this better, because how often do kids say they know something when you are collecting answers for a KWL chart, and you can’t put it up there because it is false information? I hated this because I was always worried someone would take that one thing they heard someone “know” and start to believe it as so.)  They wrote these on sticky notes and placed them on one big chart that I had created on butcher paper. They also wrote it on their own personal charts.

Second, I provided students with a nonfiction reading passage that I had written (and is found in my animal classification unit) about their particular class. As students are reading, they have to take note of whether the information they wrote in the first column that they thought to be true was confirmed (second column) or not. If not, they had to attend to any misconceptions they had and write it in the fourth column.

Finally, at the end, they wrote down any questions or things that they still wondered about and placed those in the final column.

We continued to do this on both sticky notes for our big class chart and on our own individual charts (we completed the entire individual charts over time with all five classes). Then, we discussed each column, especially the misconceptions. We also discussed how we could find out the answers to our questions and the things we wondered about.