Teaching About Variables in Science 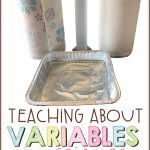 If you are teaching the scientific method in your classroom, then you should also be teaching about variables! A variable is something that can change or vary for an experiment to be a success. There are three types- an independent variable (sometimes called a manipulated variable), a dependent variable (sometimes referred to as the responding variable), and the controlled variable. Each has an important role to play in experiments.

Often times students will mix up the three variables. It takes a lot of practice to help them – which is where the experiments come in.

An independent variable asks the question, “Which variable are you testing?” It is also the variable that changes or varies in the experiment. It is part of the research question and is intentionally changed.

The controlled variable asks the question, “What things will you make sure will stay the same during the experiment?” All of these variables do not change and are kept the same the entire time throughout the experiment.

When we control variables, we are able to draw conclusions between the independent and dependent variables without having skewed results.

One of my favorite activities to do that helps to teach about the three different variables is the Paper Towels Lab. I group students up and provide each group with a roll of a generic brand of paper towels and a brand name roll of paper towels. Then I pose the question, “Will a brand name paper towel absorb more water than a generic paper towel?”

I also provide each group with 250 mL of water, a graduated cylinder, and a tin pan.

I have each group measure out a piece of paper towel that is the same perimeter. We discuss how we don’t want the size of the paper towel to affect the results. This is part of the controlled variables.

Then we all pour 250 mL of water into our tin pans and dip one paper towel for 30 seconds. We count together. Again, we discuss that these are the controlled variables because we are going to keep the amount of water the same for both types of paper towels and the amount of time.

After 30 seconds, we remove the paper towel from the tin and hold it up above our tin and allow it to drip. We all hold it with one hand and count 30 seconds again.

We place our paper towel to the side and then take the water in the tin pan and carefully pour it into the graduated cylinder to measure it. Then we subtract that number from our original number (250 mL) to discover the difference. The difference is how much water that particular paper towel could hold.

We then repeat the experiment with the other brand of paper towels. We do everything the exact same way.

We also discuss the importance of repeated trials. We repeat the test 2 more times for each type of paper towel to get an average.

What we found was indeed the name brand paper towel did hold more water than the generic brand.

The Results of our Paper Towel Lab

After completing this lab, have your students practice identifying the various types of variables using this freebie!