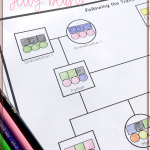 I know Easter season is over, but that doesn’t mean you can’t still find jelly beans. And, if you teach genetics at all, then you are going to want to snatch some up! I have a great demonstration that will really help your students understand how traits are passed from parents to offspring. You know, just good ol’ basic genetics!

In this fun activity, you will begin by preparing 10 plastic cups for each group (you may want to decide how many groups you will have – read on first…) with the following labels:

You could also have students label the cups if you prefer. Then, place jelly beans in the cups as stated below:

The remaining cups will not be filled with any jelly beans at the start of the activity.

First, I break the students up into groups and provide them with the cups and the student genetics sheet. We discuss how, on the sheet, the circles stand for the females, and the squares stand for the males. This is important when we get to the children later on.

I also assign students in the group a role (grandfather, grandmother, father, mother, and so on) to make it a bit entertaining. It’s not necessary, but it also gives each student an active part in the demonstration.

For the example below, grandfather 1 may have gotten the green jelly beans from his mother and the black from his father. Therefore, students would color in the squares black and the circles green to represent which color came from which gender. For grandmother 1, the student chooses that she got her purple “trait” from her father (squares) and the pink “trait” from her mother (circles). Make sure students do this with all of the grandparents.

Now it is time to share genetic information between grandmother 1 and grandfather 1 as they pass it to their offspring, father. Have the student who is playing grandfather 1 close his eyes and reach into his cup, randomly choosing three jelly beans. These beans should be placed into the father’s cup. Then I have grandmother 1 do the same. Now, father has all of his characteristics, half from grandmother 1 and a half from grandfather 1. Have the students color in the father’s section on the chart. Remind students the circle represents the mother and the square represents the father. We then repeated the entire process to create the genetic make-up of mother.

Now it is time to determine what traits are passed to the offspring of mother and father. I had my students start with Danny. I had the father close his eyes and randomly choose three jelly beans. I then had the students stop and color in the squares of those three colors before moving on to the mother’s traits. I did this to prevent confusion about which cup to return the jelly beans to later. Next, I had the mother do the same and the color in the chart to match. When they each finished, they had to return the jelly beans to each parent’s cup and repeat the procedure for each of the remaining children. It’s very important that each sibling gets to pick from the same set of traits; that is why the jelly beans are returned to the cup after each child’s genetic make-up is created.

After we completed our charts, we talked about them and what we noticed. We talked about how half of our characteristics come from each of our parents and how we can’t pick what gets passed on, but instead, they are randomly chosen. We also talked about how some siblings look a lot alike and some look very different from one another – even with the same parents! We also had some great discussions about how some traits got passed on from grandparents, while others died out. For instance, one group had the father choose only green jelly beans, so the black jelly bean trait was never passed on. It was interesting!