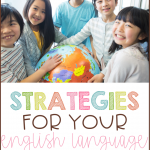 I’ve made many mistakes during my teaching career and one in particular still haunts me to this day. It was with my first English Language Learner. He was a student new to America and was from South Korea. He hardly spoke any English and I was in my third year of teaching. I had no idea what to do with a student who didn’t speak English, so embarrassingly, I just sat him in the back of the room and ignored him much of the first semester. I hate saying that because that is not the kind of teacher I am now, but at the time, I really had no idea what to do and had too much pride to ask. I felt I was “supposed” to know what to do and if I didn’t know, I could be “written up” or worse, lose my job.  That poor kid.

Over winter break I did a little research and even reached out to the ESOL teacher on staff. The second semester had gone much better, but I had still let that student down for the first part of the year. I can only imagine what his first thoughts of the US school system must have been.

To help other teachers that may be experiencing that same situation, I wanted to share the various strategies I have learned over my years of teaching English Language Learners in hopes that you won’t make my same mistake.

It doesn’t matter if your district calls them ESOL (English for Speakers of Other Languages), LEP (Limited English Proficient), ELD (English Language Development, or ELL (English Language Learners), they all have one thing in common- they are learning the English language. This also means that they are going to need some accommodations in your classroom to help them succeed.

It’s not entirely the responsibility of the ELL person, as they can only assist so many hours a week, and most ELL students are now mainstream. That means, a large portion of the time they are going to be in your classroom and your responsibility.

1.) Get to know your student. This is important with all students in your class, but it’s also important with English Language Learners because they are very likely feeling nervous and apprehensive about coming to school. If you can understand how they are truly feeling that can help you empathize more with them. Further, when you get to know your student, you can help gather background knowledge (for later use) and help celebrate the diversity that he or she brings into the classroom. I actually ask my ELL students now, “would you be willing to teach me some of your language, too?” so they feel important.

2.) Find lots of different ways to communicate information. Teachers most commonly use pictures or images, but you can also act things out, model things, use video, or even google translate. It’s also a good idea to place labels around your room to name things, such as “door,” “window,” and so on. If you can include their native language also, that would be helpful.

3.) Focus on the right thing. With my first English Language Learner, I remember thinking all he was doing was copying everyone else and not learning anything. The reality is, they aren’t learning the content as much as they are learning the alphabet, the words, the “language.” Don’t worry about them learning the content of science, or whatever subject they are learning. Instead, focus on the letters and words. When they are copying another student, they are practicing writing those letters and spelling words. Help them say the word after. Then try to help them understand what the word means.

4.) Have them work with others as much as possible. Cooperative learning is very important. If you’ve ever had kids, you know that the first child takes longer to learn to speak words than the younger ones. This is because the second (and subsequent) have others around them (their age) that talk (and talk and talk and talk) that they pick it up from. The same is true of English Language Learners. This also gives them the opportunity to think-pair-share and ask questions. If it’s possible, try to partner them up occasionally with someone who speaks their native language.

5.) Use tools as much as possible. When I suggest tools, I’m talking about manipulatives, graphic organizers, sentence stems, apps, charts, and other methods that can help things become more physical for your ELL student. If possible include lots of scaffolding, background knowledge (including from his/her culture- see #1 above), think-alouds, and preteaching.

6.) Have lots of patience. Since English Language Learners are new at the language, they will need you to speak slower and provide lots of processing time. You will need to check in with them often to make sure they are understanding. It’s also a good idea to wait until they are ready before moving on. You definitely don’t want to force things too much. By staying in constant contact with the ELL teacher you should be able to know what you can try and not try.

7.) Think kindergarten. My biggest piece of advice is to think about kindergarten or first grade when it comes to learning the language. This student is learning to read much like a kindergartner or first grader is. He or she isn’t going to be able to suddenly read large words or use large words. It’s okay to practice with sheets that look at vowel sounds and digraphs.

If you keep these 7 things in mind, I’m sure you won’t make the mistake I did my third year teaching with my first English Language Learner.

No matter what, don’t give up. That’s the most important piece of all.