Should You Teach the Scientific Method? 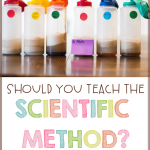 The scientific method is a staple that is in nearly every science classroom around the world, yet should it be? With the Next Generation Science Standards having such an emphasis on inquiry, is the scientific method outdated? Let’s explore whether you should teach students this methodology in your elementary classroom.

The NSTA’s Standards for Science Teacher Preparation has always emphasized the need for scientific inquiry and has never recognized the scientific method. In fact, in 2003, they specifically stated, “no such method exists, noting that inquiry should not be reduced to the specific steps, but should be dynamic and reach beyond isolated procedures” but yet, it is continued to be taught year after year, throughout district after district. And their stance has definitely NOT changed after adopting the NGSS.

Why You SHOULDN’T Teach the Scientific Method

1.) Real life science is not a linear, step-by-step method. The reality is scientists do not follow a step-by-step method to answer questions. Often factors such as prior knowledge, expectations, past experiences, talking to colleagues, available funding, and technology shape the procedures they use.

2.) Scientists do not and cannot always use controlled experiments, but are still able to come to a solid conclusion on how the natural world works.

3.) Data is not always straightforward. Scientists are often left analyzing data and trying to determine the meaning behind it. In some cases, they’ll look at the same data and come to very different conclusions.

4.) Not all knowledge in science can be proven or absolutely true. We often tell our students to “prove it” but the reality is, in science, we cannot ever know for sure our ideas are 110% correct. Science is always evolving.

5.) Many scientists don’t do experiments. A small few do experiments, but most conduct investigations or observations (which is a form of an investigation.) What is the difference? (I use to mix these up too, thinking it didn’t really matter at the elementary level!) Experiments are activities that have “fair testing” (or a controlled variable and running tests to determine the influence of certain variables on a phenomenon).

6.) Not every science event starts with a hypothesis. In experimental testing, a student is very rarely going to have the background knowledge to determine in advance what will occur. And, often times teachers convey that a hypothesis is a guess. Unfortunately, the scenario goes something like this-  the student “guesses” what the outcome of the experiment will be. Then the student is wrong. Then the student erases the “guess” and feels frustrated. This often leads to the feeling that science is difficult, unpredictable, and focused on having “right” answers.

But My District Requires Teaching the Scientific Method…

Solutions to the Problems with the Scientific Method.

When beginning a new unit or concept in science, begin with discrepant events that are more likely to activate a learners’ attention and catalyze their thinking processes. This will also motivate them to want to know. Then you can begin the inquiry process. Start by clarifying what the student wants to know and then provide the support needed to help the student determine what procedures they need to do to find out. Together you can guide the student in determining the materials needed, the amount of time required, making sure fair testing is done, and confirming that it is safe. Even when students’ ideas seem insufficient or could be done a better way, encourage them to try it. Then draw attention to the fact that there are multiple ways to try to answer a question and that scientists have to make the decisions about which is the best way.

Students need to learn that science has flexibility and is not a rigid, one-way simplistic approach. Instead, they need to experience science more accurately, just as scientists do. That’s the point of inquiry and the scientific method will not allow you to arrive there.