Meeting with a Parent of a Behavior Child 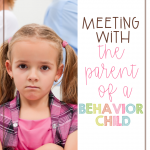 At some point in every teacher’s career, you will need to meet with a parent to discuss their child’s behavior. It can be a bit nerve-wracking if it is your first time and you aren’t always sure just how to approach it.

I remember my first time meeting with parents to discuss their behavior child. I was extremely nervous, because I didn’t want them to think I didn’t like their child, nor did I want to offend them in any way. I had already heard from some other teachers that there are a variety of parents out there. There are parents who do not believe their child does anything wrong, while there are also parents who don’t do anything about the situation. Where these parents fit on this scale, I had no idea. All I knew was I was a new teacher who needed their help.

Years later I have been through countless meetings with parents – some have been bad, but most have gone well. For the most part, parents are on your side and do not intend to be defensive. They want to help you and, most importantly, help their child. But, as with everything in education, it’s all about your approach and their background experience that is brought to the table that determines how well it will go.

I have below a collection of things I have learned over the years about meeting with parents about their child’s behavior.

Meeting with Parents about Their Child’s Behavior

1.)  Ultimately, before you meet with parents, you want to make sure you have gathered evidence to support your case. You will need this before meeting with a parent. It is never good to go to a parent without documented evidence, including times and dates that you have contacted the parent in the past.

2.)  You will also want to have a suggested plan ready. Before meeting with parents, it is a good idea to think ahead for some possible suggestions for solutions to the problem. They may not be used, but it is still a good idea. I recall once being told, “Complaining does nothing; it’s the solution that matters.”

3.)  Remind yourself and the parents at the beginning of the meeting that the goal is to maximize the educational benefits of the child. It should not be to complain about the child, nor should it be a place for emotional baggage, confrontation, hot tempers, or disagreements. If you fear that this may occur, have other teachers join you. One year there was one particular parent who, every time I saw her, would push my buttons and would escalate my emotions very quickly. I found when others were around she wouldn’t be so quick to push them, and I wouldn’t be so quick to get riled up. We are all human, and we all have emotions…unless you are a robot. 😉

4.)  I try very hard to start the conference off very casual, but not for a long period of time because parents are busy. They often want to get to the point of the meeting. I do try to mention great things the student has been doing and then say, “But, we have been having just this one problem, and I think we can get it corrected with your help!” I always make it appear that I am involving them to have them brainstorm ideas on how we can solve the issue with me rather than an attack on their parenting or child. This puts them in problem-solving mode rather than defensive mode.

5.)  Calmly inform the parents of the issue at hand and present the evidence gathered. Stress the repeated offenses so that they can see that this is not just one isolated incident. (Some parents are quick to think you may just be singling their child out; therefore, repeated incidents show a pattern of behavior.)  State the NUMBER of witnesses, but do not tell who. The privacy of the other children is important.

6.)  After explaining everything, ask the student (who should be there – request ahead of time that they attend) to speak to the wrongdoings. Refuse to accept statements that blame others. It’s important that the students own up to their actions.

7.)  After everyone has spoken on the issue, offer a suggested plan of action (those ideas that you thought out of ahead of time), but again, present it as, “What about this idea; do you think it would be something that would work?” Or, ask the parents for suggestions for a solution. Consider asking the student for solutions also, but keep in mind they must be solutions that are actionable and provide ownership. Simply saying, “I’m sorry, and it’ll never happen again” is not enough.

8.)  Once a solution has been agreed upon, discuss it and make sure that everyone understands it, including the student. Agree to a time in the future when it can be reevaluated. Then, end the meeting with a positive statement and tone about the student. “I feel really great about the direction we are heading! I just know this will help you in so many ways academically. Aren’t you excited?”

9.)  After the meeting follow up with a typed version of the agreed upon details.

10.)  Follow up occasionally to make sure everyone is doing their part of the agreement and to determine if a new plan is needed or any modifications to the plan. Additionally, check in with the student to provide encouragement and motivation.

11.)  Continue to document for any future meetings.

While not all discussed plans are effective, and some will need to be taken back to the table to be modified, the process of talking to parents about their child’s behavior is more about helping them and asking them to help you. It’s about working together for the benefit of the child. Documentation of everything done is critical for the Response to Intervention (RTI) process later on down the road (if necessary) or in case of involving administration.

Ultimately, I just imagine myself in the shoes of the parent. They are doing the best they can as a parent – they always are. No parent is thinking to themselves, “I’m trying to have the worst behaved child ever!” No parent sends their child off to school telling them, “Make your teacher’s day horrible!” My point is even though we have a job to do that can sometimes be difficult because of a behavioral child, and it’s very easy to (mentally, at the very least) blame the parents, keep in mind that they do want the best for their child and they do want to help you.