Home » Teaching Children to be Skeptical

Teaching Children to be Skeptical 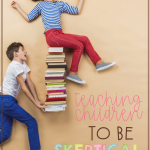 Each day children are blasted with nonstop messages that are trying to tell them how they should think: on television, there is the stream of commercials; on the internet, there are pop-ups and advertisements. It is everywhere. With these messages constantly flashing around them, it is easy for a child to instantly believe everything they read or see, thinking it is “truth.”

I remember once during an election year, students were instantly telling me who needed to be president. I knew without a doubt they were only reflecting what they heard their parents say. They were too young to really know what was going on the world of politics (and I’m sure if given the choice at their age, they wouldn’t want to know!). To make things interesting, I instructed all students to pull out a scrap piece of paper and list all the reasons they felt I should vote for their particular presidential candidate. Just as I suspected, many had very few real reasons, if any at all. What I mostly got was, “**** is a good person,” or “My mom said you should vote for ****.” That lends itself perfectly to my lesson on skepticism.

As teachers, we don’t necessarily want to step on the toes of parents, but we do want to teach children just how important it is to not be passive to the ideas of others. It is important that they learn to think for themselves and to challenge what appear to be reliable facts.

Teaching Children to be Skeptical

When children are taught to be skeptical and do not believe everything they hear, read, or see, they learn to problem solve. Children learn to think for themselves, which ultimately leads to confidence. When I say that children need to be skeptical, I’m not speaking of a disrespectful form, but being skeptical in the sense of inquiring and wanting more evidence before just accepting a claim as true.

To help students in your classroom learn to be more skeptical, consider these ideas:

1.)  Teach children to think like a scientist.  All scientists are skeptical until there is ample evidence to support their claims. Scientists like to ask, “What makes you think this way?” and “What facts do you have to support your ideas?”

2.)  Teach children the differences between a fact and an opinion. Oftentimes, an opinion can take on the appearance of a fact, when it really isn’t.

3.)  Teach children about primary and secondary sources. In the game of telephone, when ideas are passed around, students learn very quickly how the message changes. As we move away from primary sources, the message also can become altered.

4.)  Teach children to consider the alternate perspective or position. It always helps to see both points of view.

6.)  Teach children to not be afraid to ask questions.  This means to think deeply about the topic and ask those tough questions.

7.)  Teach children those necessary research skills (and, of course, how to discern between credible and non-credible sources) so they can find the facts themselves.

8.)  Teach children to learn to listen to both logic and their gut!

9.)  Teach children to be independent thinkers. Make sure that you are not spoon-feeding them!

It is really important to teach children to seek additional evidence, to be open-minded, and to ask lots of questions before they just take what they are told and believe it.

Finally, before I sign off on this post, I want to share a personal story… A story I don’t like to tell, but it makes my point clear. When I was in high school, my dad convinced me that George Bush was living in the White House with his mother, Barbara Bush. It was, of course, a joke on his end, but I totally believed him because, after all, he was my dad – an authority figure. I had no clue he was joking. (As you can tell, at that time, social studies was not my best subject.) So, I remember thinking I was so smart and spoke up one day in my US History class about President Bush and his MOTHER. The entire class laughed at me hysterically. While, on my dad’s end, he never meant for it to turn into a hurtful thing, for me it was a lesson I’ll never forget. I decided from that moment on, I could no longer be gullible; I had to learn to be skeptical and think critically and look for evidence before I take in anything as fact from anybody.

I used to ask my class, “How do you know that what I am teaching you is actually true? How do you know that I’m not making stuff up as I stand here in front of you?” They rely too heavily on just believing what people tell them as true. While I’m not saying I want to create a bunch of distrusting children, I do want to create children that are capable of challenging things – even people with authority – but respectfully, of course.

View cart “End of the Year Awards | Student Certificates | Class Awards” has been added to your cart.